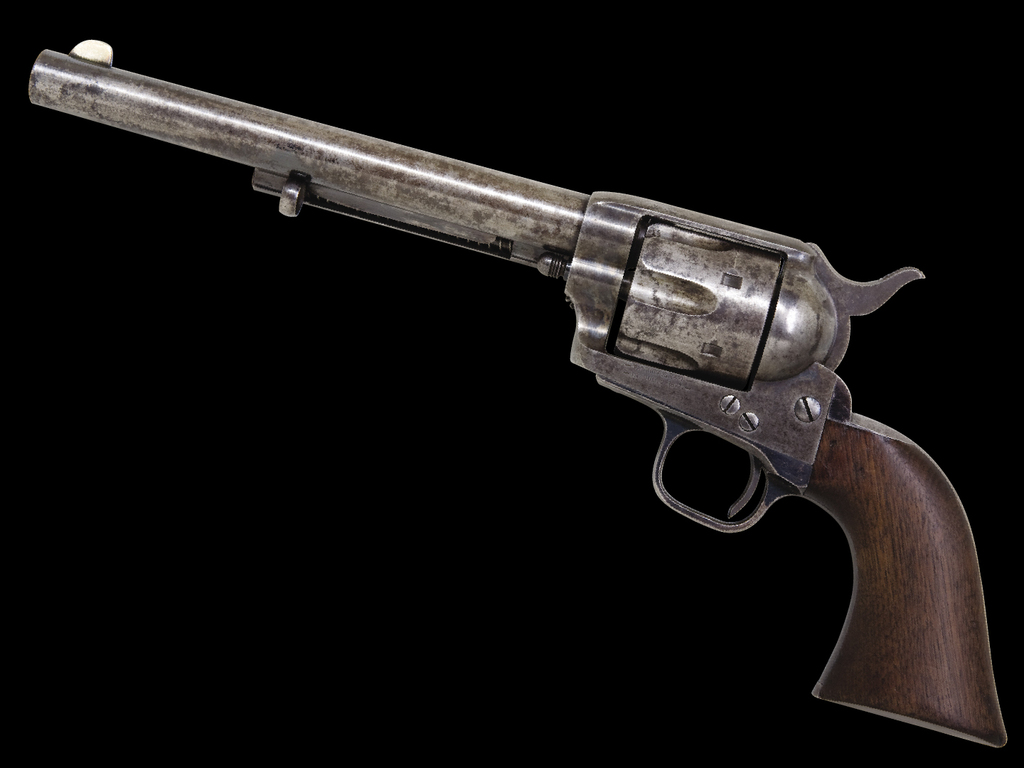 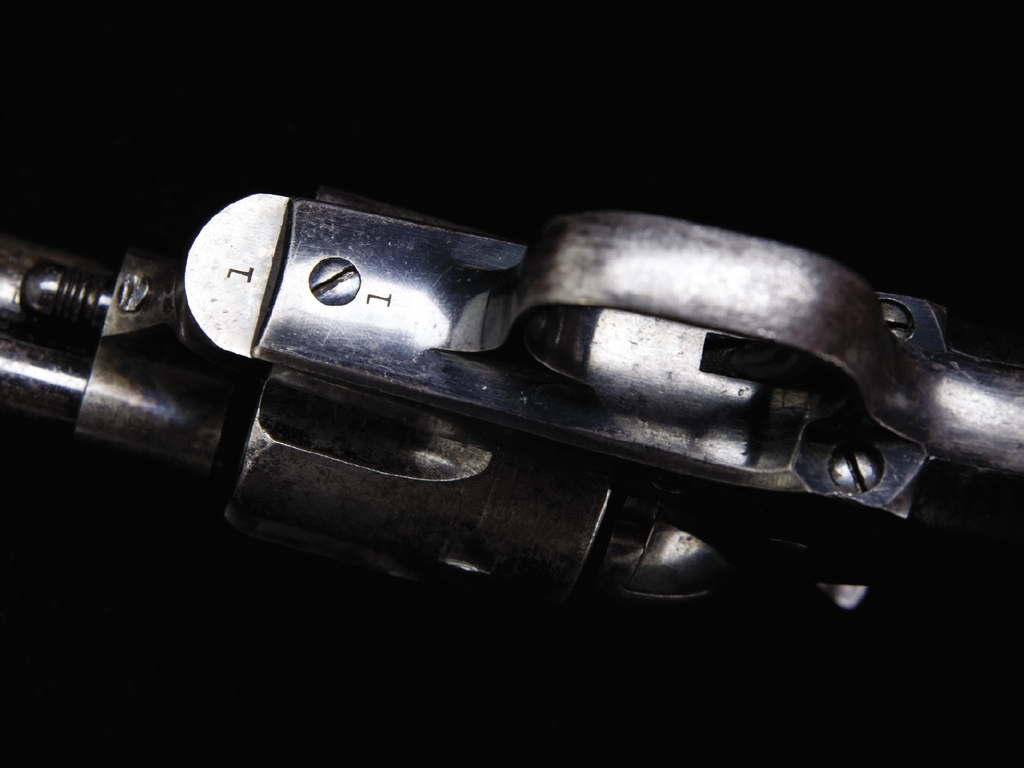 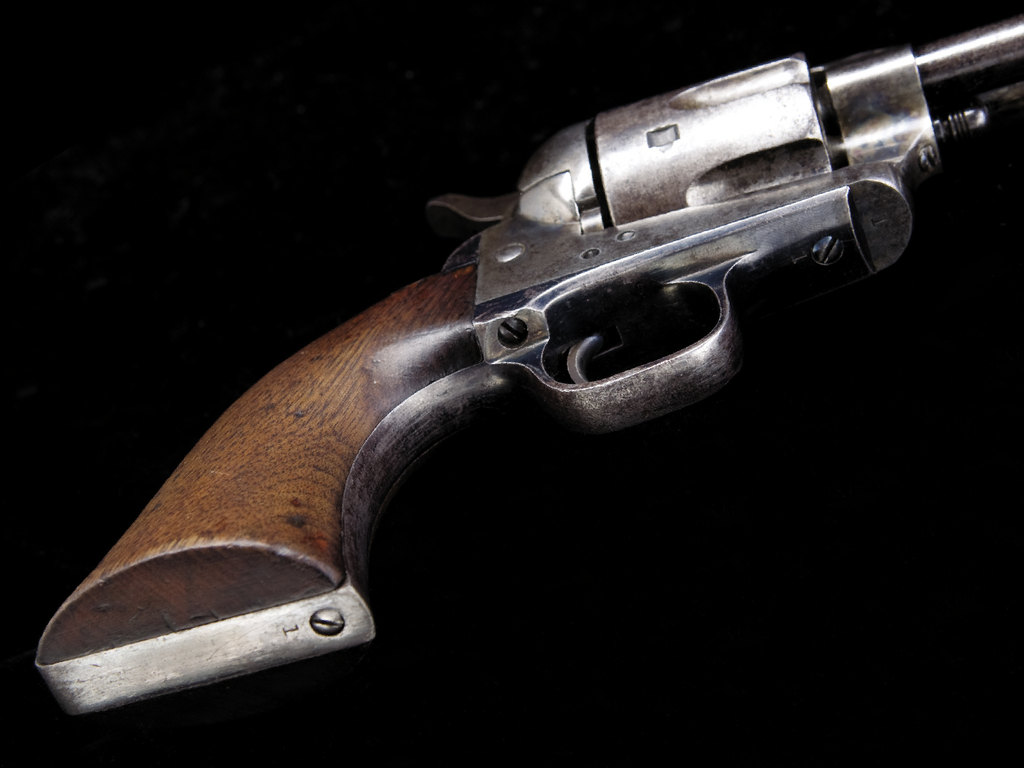 The .45 Colt cartridge was of center fire design containing charges of up to 40 grains (2.6 g) of fine grained black powder and a 255-grain (16.5 g) blunt round nosed bullet. Relative to period cartridges and most later handgun rounds, it was quite powerful in its full loading.
The Colt Single Action Army revolver (along with the 1870 and 1875 Smith and Wesson Model 3 ("Schofield") revolvers replaced the Colt 1860 Army Percussion revolver. The Colt quickly gained favor over the S&W and remained the primary US military sidearm until 1892 when it was replaced by the .38 Long Colt caliber Colt Model 1892, a double action revolver with swing-out cylinder. By the end of 1874, serial no. 16,000 was reached; 12,500 Colt Single Action Army revolvers chambered for the .45 Colt cartridge had entered service and the remaining revolvers were sold in the civil market.

Variations 1873–1941
Colt SAA Flattop Target
The Single Action Army became available in standard barrel lengths of 4¾", 5½" as well as the Cavalry standard, original 7½". The shorter barreled revolvers are sometimes called the "Civilian" or "Gunfighter" model (4¾") and the Artillery Model (5½"). There was also a variant with a sub 4" barrel, without an ejector rod unofficially referred to as the "Sheriff's Model", "Banker's Special", or "Storekeeper.
From 1875 until 1880 Colt marketed a Single Action revolver in the .44 rimfire Henry caliber in a separate number range from no. 1 to 1,863.
A "Flattop Target Model" was listed in Colt's catalogs from 1890 to 1898. Colt manufactured 914 of these revolvers with a frame which was flat on the top and fitted with an adjustable leaf rear sight. The front sight consisted of a base with an interchangeable blade.
In 1896, at serial number 164,100, a spring loaded base pin latch replaced the cylinder pin retaining screw and by 1900, at serial number 192,000, the Colt Single Action was certified for use with smokeless powder.  In 1920, larger, highly visible sights replaced the original thin blade and notch. The revolvers remained essentially unchanged from that point until cessation of manufacture at the beginning of World War I.
45 Colt Cartridge variations

Colt .45 Cartridges
The first Colt Single Action Army revolvers were manufactured in .44 American caliber for the 1872 government trials, as the .44 American was the cartridge used in the 1000 Smith & Wesson Model 3 revolvers issued to the troops. After the tests, the Colt was declared the superior revolver and the government specified that a .45 caliber cartridge would be required. With the adoption of the Colt Single Action Army revolver in 1873, the service cartridges were Copper cased .45 center fire Benét inside primed “Colt’s Revolver Cartridges” loaded with 30 grains of black powder and an inside lubricated bullet of 250 grain. They were manufactured Frankford Arsenal, Philadelphia, PA, through 1874. In 1875, the cartridge was shortened so that it would also function in the newly adopted S & W Schofield revolver. It was designated “Revolver Cartridge” and loaded with 28 grains of black powder and a bullet of 230 grain. The Benét primed cartridges were manufactured until 1882 and then replaced by reloadable cartridges with brass cases and external primers.
The original .45 Colt black powder load of 40 grains propelled the 250-255 grain bullet at a nominal 970 feet per second (300 m/s). Authors John Taffin and Mike Venturino have demonstrated that modern black powder loadings of the 45 Colt cartridge frequently achieve velocities in the vicinity of 1,000 feet per second (300 m/s) with the 7½" "cavalry" barrel length, even though modern solid-head cases make it impossible to load a full 40 grains. Specifications for 20th-century smokeless loads set velocity with a 255-grain (16.5 g) round-nosed flat-point bullet at 870 feet per second (270 m/s) providing 429-foot-pound-force (582 J) energy.
The current version of the 45 Colt differs from the original cartridge case in that the rim is significantly larger (with a groove immediately above it) and the internal aspect of the primer pocket is surrounded by solid brass instead of protruding into the powder chamber. This "solid head" case is stronger and resists deformation of the primer pocket. Some commercial and custom revolvers and single-shot pistols (such as the Ruger Blackhawk, T/C Contender and others) employ high-pressure loads that are dangerous in the Single Action Army and other vintage arms chambered for the 45 Colt cartridge, especially 19th-century "pre-smokeless" revolvers which should be fired (if at all) only with black powder or light smokeless loads.
Prior to World War II, the 45 Colt used a groove diameter of .454"; post-WW II production adopted the .452" groove diameter of the 45 ACP. Handloaders should slug their barrels to determine the correct groove diameter, and size cast bullets accordingly.
Calibers
By 1878 the Colt SAA was being offered from the factory in additional calibers for civilian and foreign military sales. Many were sold in .44-40 Winchester Center Fire (44WCF), introduced in 1878 to allow cross-compatibility with the Winchester '73 lever action rifle; this model was called the "Colt Frontier Six-Shooter" which was etched and later roll-stamped on the left side of the barrel. Additional period calibers for the SAA included .38-40 Winchester (38 WCF) introduced in 1884, the .32-20 Winchester (32 WCF) introduced in 1884, the .41 Colt introduced in 1885, the .38 Long Colt in 1887, the ..38 Special and the .357 Magnum in the 20th Century. Some of the separately-serialized .44 Henry rimfire revolvers were rechambered to .22 rimfire after 1885. The SAA at one time or another was offered in dozens of calibers from .22 rimfire to.476 Eley, though the .45 Colt has always been the most common. A scaled-down .22 rimfire version called the Scout or Frontier Scout was available in the late 20th Century.
1st -, 2nd -, 3rd -Generation Colt Single Action and Calibers
From 1873 through 1940 (with small numbers assembled during and after World War II, the so called "Pre-War, Post-War" model), production of the Colt Single Action Army reached 357,859. This is identified as the "Pre War" or "First Generation" of the model. Calibers, at least thirty in all, ranged from .22 rimfire through .476 Eley, with approximately half, or 158,884 (including Bisley and Flat Top Target variations), chambered for .45 Colt. The next most prevalent were the .44-40 Winchester Center fire (WCF) at 71,392; 38-40 (38 WCF) at 50,520; 32-20 Winchester (32 WCF) at 43,284 and, the 41 Colt at 19,676.
Second Generation Colt Single Action Army revolvers were produced from 1956–1974 and carried serial numbers in the range of 0001SA to 73,205SA. About 400 of the Second Generation Colt Single Actions were factory engraved by Colt's, the factory engravers of the period were Alvin Herbert, Earl Bieu, Dennis Kies, Robert Burt and Leonard Francolini. One of the most sought-after engravers who have worked on Colt revolvers was Alvin White and the shop of A. A. White Engravers.
The Third Generation began in 1976 characterized by a change in barrel thread pitch and a solid cylinder bushing replacing the removable/replaceable part from the first and second generations. This Generation ran until 1982 as a limited-issue product with the serial number range of SA80,000 to SA99,999. In 1994, production resumed with the increase in popularity of "Cowboy Action Shooting". These models are known either as "Late Third Generation" or sometimes Fourth Generation with the serial number convention changing yet again starting with S02001A and continuing with the "S" prefix and "A" suffix to 2009. Colt currently offers the Single Action Army in one of two finishes: either an all-nickel or blued with color case-hardened frame; in the traditional three barrel lengths: 4¾", 5½" and 7½"; and six chamberings: 32-20, 38-40, 44-40, .38 Special, 357 Magnum or 45 Colt; a total of 36 variations.
Engraved Colt’s
It has been argued that having a Engraved Colt not done by the factory diminishes the value of the Colt Revolver. In a sense that may be true to those who collect only Factory Engraved and Factory Lettered Colts. However many firearms are sent outside or ordered in the white by distinguished master engravers for finishing work to specific customer demands.
The engravers Guild has a list of outstanding Master Engravers who are very competent in engraving fine firearms and sometimes at a better value than the factory prices. 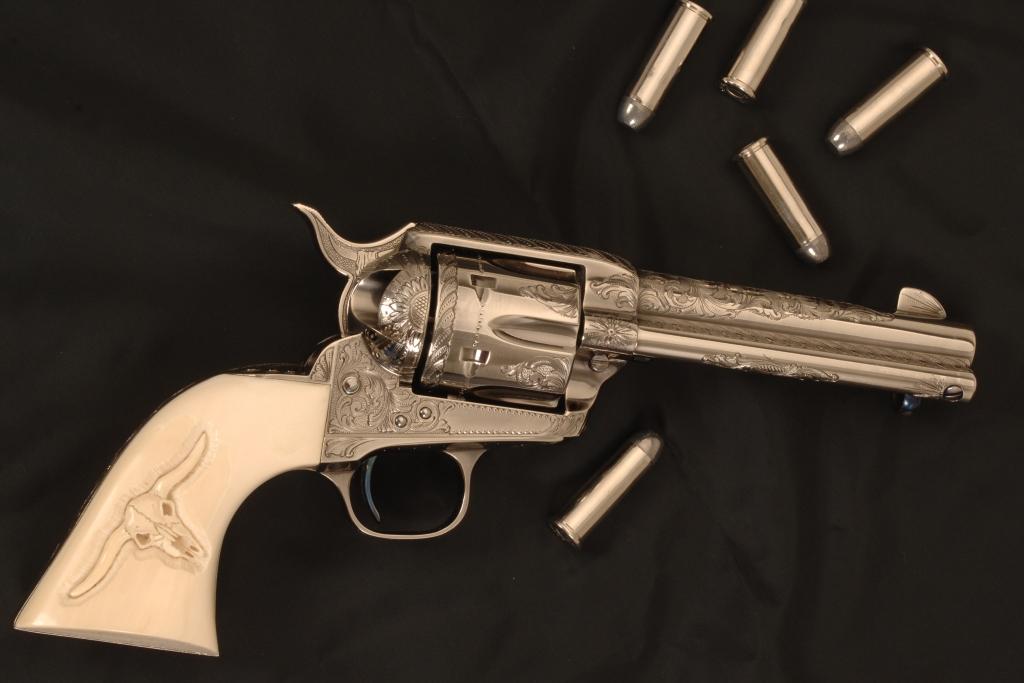 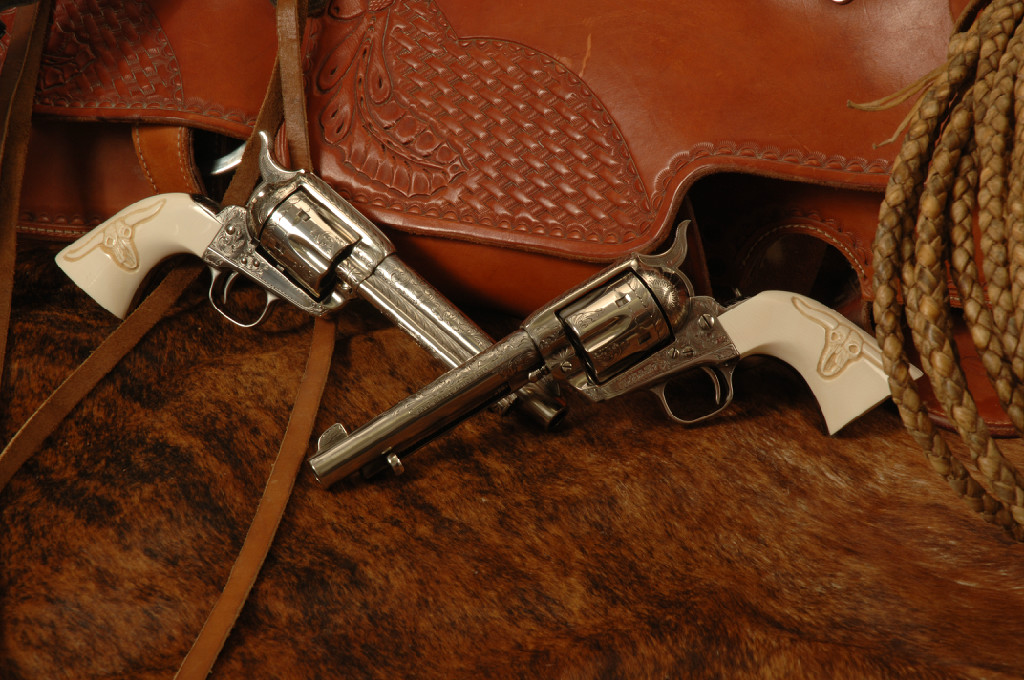 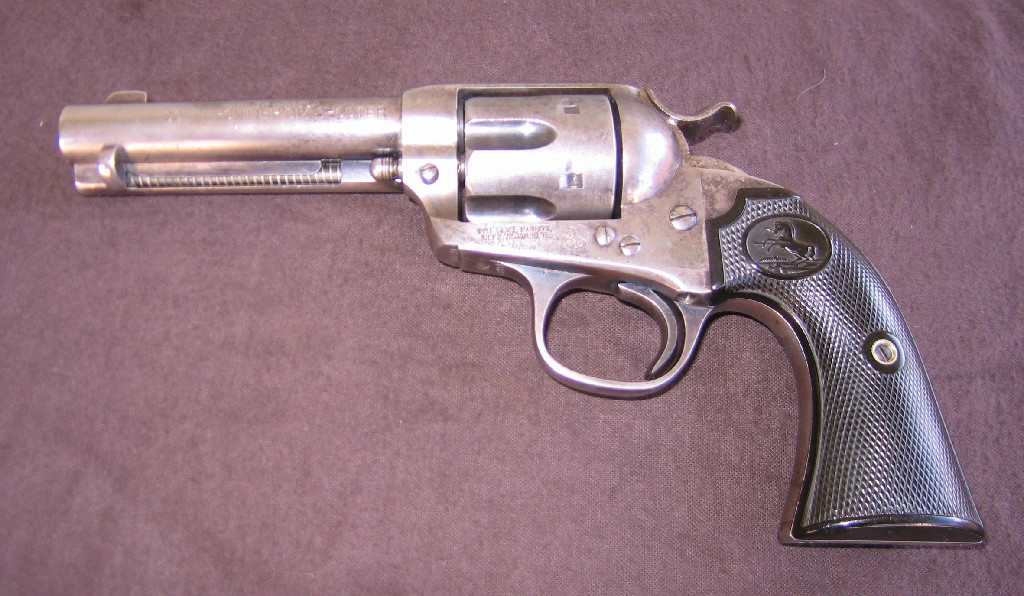