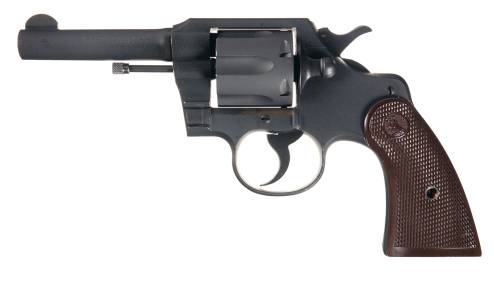 U.S. COLT COMMANDO
"E" FRAME
When World War Two started America needed firearms and plenty of them.
With the US Model 1911-A1 .45 Automatic pistol being committed to standard issue for troops, commercial revolvers were pressed into service for arming defense plant guards, Civil Defense, for sales to civilian police departments, and for some limited issue to the military.
Both Colt Firearms and Smith & Wesson were called on to make war-time versions of their standard service type revolvers.
S&W responded with a parkerized version of their Model 10 M&P .38 Special revolver they called the "Victory Model".
Colt's war-time revolver was a parkerized finished Official Police known as the Colt Commando.
This was nothing more than the Official Police with a dull parkerized finish and reddish-brown plastic grips Colt called "Coltwood".
These early type plastic grips are known for shrinking, leaving gaps in the fit to the frame.
These were standard pre-war type Colt revolvers except the checkering was omitted from the trigger and the cylinder release.
The Commando was made in .38 Special, and in 4 inch barrels, with a few 2 inch barrels. There are reports that a few very rare 6 inch models were made.
COLT COMMANDO WITH 2 INCH BARREL 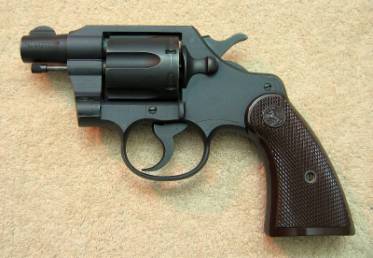 Colt manufactured about 50,000 Commandos from 1942 to sometime in 1945.
Commando serial numbers started at serial number 1, and went to about 50,617.
Most Commando revolvers had a US Government inspectors "Flaming Bomb" stamp on the top left rear of the frame, but not all guns had these stamps. 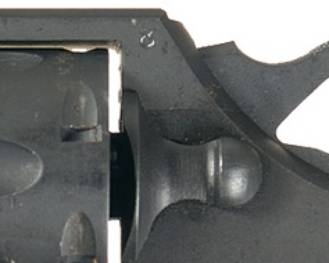 The Commando had standard Colt inspectors stamps and the Colt "Verified Proof" stamp of a "VP" in a triangle on the left front trigger guard web.

The serial number was stamped in standard Colt form of the number stamped on the frame just below the barrel where the cylinder crane seats, on the cylinder crane, and inside the side plate.
Colt inspectors stamps are on the left rear of the trigger guard web, on the frame below the serial number, and on the grip frame under the grips.
Since the Commando was nothing more than an Official Police, it's not uncommon to find Official Police and Commando revolvers with interchanged parts, such as an Official Police barrel on a Commando frame, or a Commando barrel on an Official Police frame.
It's common to find a Commando with replacement commercial walnut grips.
After the war ended Commando revolvers were given to other government agencies and police departments. It's not unusual to find Commandos with stamps on the frame or back strap from post-war users, or even multiple users as the guns were passed to other agencies. Some Commandos may have civilian defense company stamps.