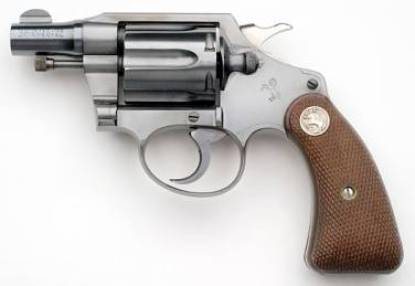 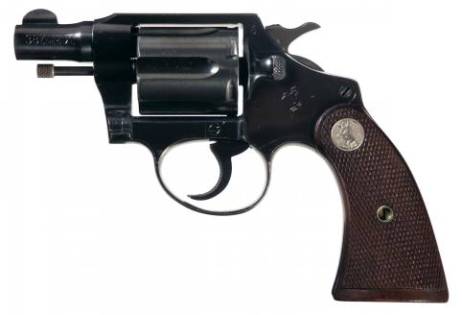 In 1933 Colt altered the gun by rounding off the grip frame to make the gun easier to conceal.  This was to be the basic form of the Detective Special up until 1966.  The guns made from 1927 to 1946 are known as the First Issue series.
During World War Two Detective Specials were made for the US Government, often with the old original pre-1933 square butt.  It's believed that these were simply pre-war Police Positive Special frames fitted with 2 inch barrels as a war-time expedient.
THE DETECTIVE SPECIAL OF 1933
Note the new rounded butt 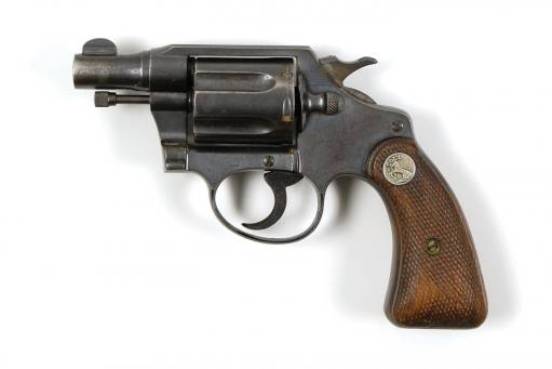 The Detective Special, Second Issue
After World War Two Colt began making minor changes to it's line of guns including the Detective Special.
Among other changes was to change the old cylinder retention system from an interlocked screw and stud to a spring and plunger under a cap screw.  The front sight was changed from the old style "half moon" to a ramped sight with a serrated rear face to improve the sight picture and had a wider pedestal on the bottom of the sight.
Later the front sight was made wider and the pedestal was deleted.  To match the wider front sight the rear sight groove was widened.
The shape of the hammer spur was changed and it was grooved instead of checkered.  The trigger was grooved instead of checkered, and the checkering on the cylinder release was deleted.
The ejector rod was lengthened.
During the late 1940's into the 1950's the grips were reddish brown plastic called "Coltwood".  Later Colt went back to checkered American Walnut with silver Colt medallions.
At this time, Colt began assigning letter codes to their frames, and the small frame series was designated as the Colt "D" frame.
Prior to this, the Detective Special was referred to only as a Police Positive Special frame.
The guns as made from 1947 to 1965 are the Second Issue series.
THE POST-WAR DETECTIVE SPECIAL.
Note the new ramped and serrated front sight, grooved hammer spur shape, and the longer ejector rod.  Trigger and cylinder latch was no longer checkered 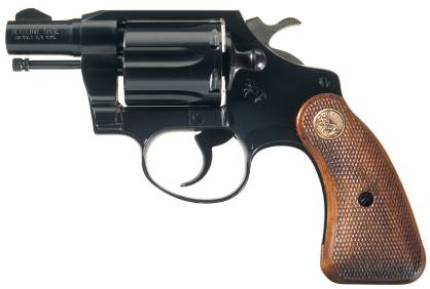 The Detective Special, Third Issue
In 1966 the grip frame was changed to the same short, "stubby" frame as the Colt Agent to simplify production.
THE 1966 COLT "D" FRAME CHANGE TO A SHORT GRIP FRAME
The wood grips overlap the bottom of the butt to give a full grip. 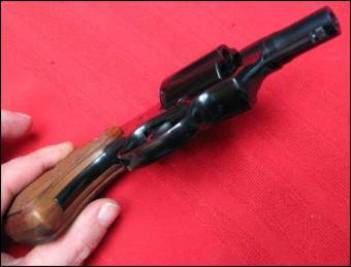 The Detective Special, Fourth Issue
In 1973 Colt did the first major redesign of the Detective Special by changing the barrel to a new heavy version that added a shroud to cover the ejector rod and a long ramped front sight. The old style narrow grips were changed to a new combat style that wrapped around the front and bottom of the frame and the trigger was now smooth instead of grooved.
This was the first Detective Special the factory rated for use with +P ammunition. The gun was rated for "up to" 3000 rounds of +P at which point the gun was to be returned to Colt for inspection and possible frame replacement.
This is known as the Fourth Issue Series and was the last actual change in the design. It was made from 1973 to 1986, when the Detective Special was officially discontinued for the first time. 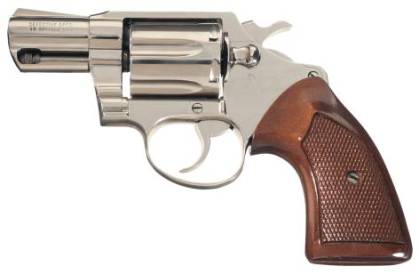 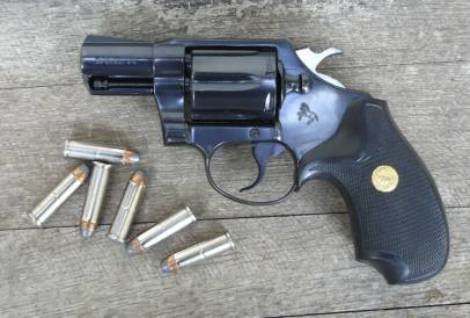 Over it's production life Colt offered the Detective Special with many options.
Calibers were .38 Special, .32 Colt New Police (.38 S&W) and .38 Colt New Police (.38 S&W).
Barrel lengths were 2 inches and 3 inches.
Finishes were bright blue, bright nickel, and satin electroless nickel, also known as "Coltguard".
Grips were checkered American walnut, "Coltwood" plastic from 1947 to 1954. Pachmayr rubber was used as an option for years and as standard on the 1993 issue.
As a factory option Colt offered the Colt hammer shroud. This covered the hammer to prevent snagging in the clothing but allowed the hammer to still be cocked for single action.
FACTORY INSTALLED HAMMER SHROUD
The tip of the hammer is exposed so it can be cocked 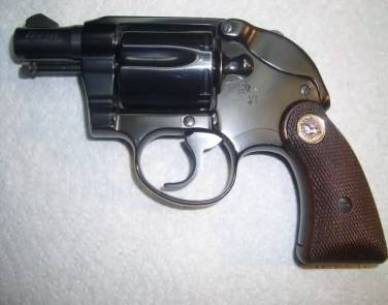 VARIATIONS
Over the years, Colt offered a number of variations and limited production models of the basic Detective Special.
In the mid-1980's Colt was undergoing a long strike and didn't have enough workers qualified to do the polishing on the entire Colt line.  So, as a means of maintaining production Colt offered a series of revolvers with an unpolished flat matte black blued finish.
The flat black Detective Special was called the Colt Commando Special.  It was made from 1984 to 1986.  As soon as the strike ended the unpolished models were all dropped.
The Commando Special, not to be confused with the WWII Commando version of the Official Police, had the matte black finish and used a rubber grip used only on the matte finish guns, and only for a few years.
Internally, the Commando Special was fitted and finished as well as the polished Detective Special model.
COMMANDO SPECIAL
Matte black bead blasted blue finish and special rubber grips 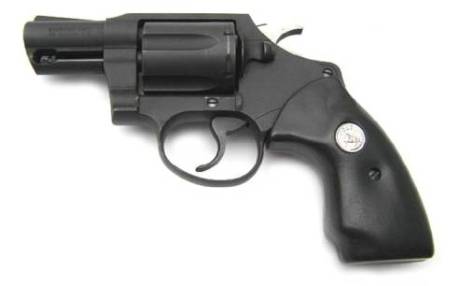 COLT BOBBED DETECTIVE SPECIAL
Hammer spur removed and converted to double action only
Available in bright blue or hard chrome plated finish
Luminous night sight insert in the front sight, action tuned for better trigger pull.
Made in 1994 and 1995 as a limited edition. 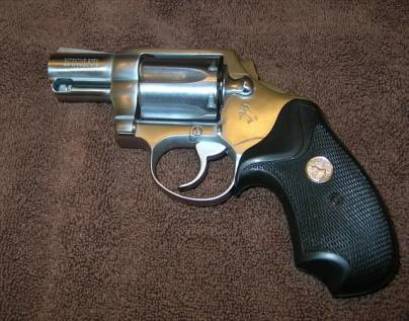 The Fitz Colt.
Probably the most famous version of the Detective Special and the most copied were the custom revolvers made by famed Colt representative John Henry "Fitz" Fitzgerald.
In the 1920's and 1930's Fitz built special order custom Colt revolvers and a few automatics made to his concept of a defense gun. He carried his altered revolvers in his front pants pockets, and designed his guns to be as fast into action as possible.
The revolvers featured a hammer spur removed and checkered on top. This allowed the gun to be snag free, but could still be cocked for single action.
The most famous feature was a trigger guard cut completely away leaving only a portion to cover the area behind the trigger. This was to eliminate any impediment to getting the finger on the trigger as fast as possible.
How many Fitz guns were built is known only to the Colt factory. Apparently many of the Fitz guns were not personally built by Fitz, but were built by Colt factory personnel.
Known Fitz models include the Detective Special, Official Police, Fitz's personal versions made from the large Colt New Service revolver, and at least one pair of Model 1911 .45 Automatics built for famed Texas Ranger Captain Manuel "Lone Wolf" Gonzales which had the trigger guards removed.
A famous owner of a Fitz Colt was Charles Lindbergh. When he testified at the trial of his infant son's kidnapper and murderer, Lindbergh was wearing his Fitz Detective Special in a shoulder holster.

Key identifying features of a genuine factory Fitz Detective Special are that they were all made prior to WWII, the high quality checkering on top of the hammer and the Colt Verified Proof stamp of a "VP" in a triangle was usually moved to the rear of the left side of the trigger guard web. Since the Verified Proof stamp is stamped on the left front of the trigger guard and that area was cut away during the conversion, the mark was usually re-stamped on the rear of the guard. Non-factory altered Fitz type guns will not have the VP stamp at all.
Due to the rarity and mystique of the Fitzgerald custom Colt's the only way to positively identify one is to buy a Colt factory Archive letter which will verify a genuine factory Fitz model.
Since even factory archive letters have been faked, a wise buyer will order a new Archive letter before paying.
COLT FITZGERALD DETECTIVE SPECIAL
Fitz guns were built only on pre-war guns
Hammer spur removed and top of hammer checkered for single action cocking
Colt Verified Proof stamp moved to the left rear trigger guard web
Front of trigger guard cut away 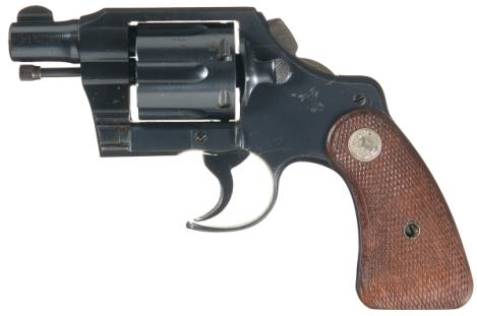