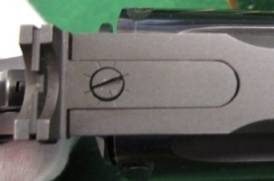 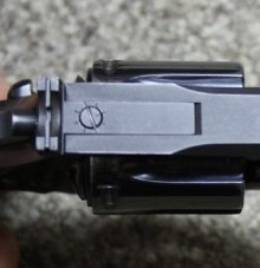 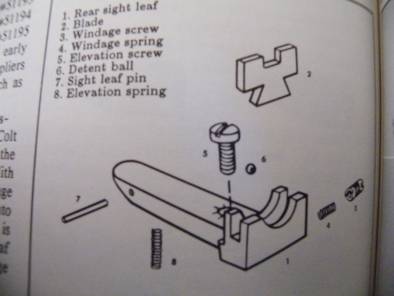 LATER PRODUCTION ACCRO REAR SIGHT
This is the later type with the square notched base and the "humped" section to allow more Elevation adjustment.
Note the squared off front end of the leaf compared to the earlier type with rounded leaf and the squared blade notch.
Early versions of this type of Accro sight had a rounded "half moon" cut below the sight blade.  Late production changed to the square cut notch.
The elevation screw assembly was different then the early Accro versions. 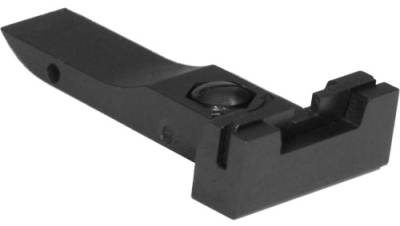 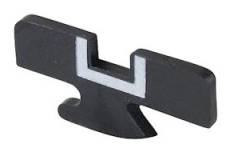 ACCRO SIGHT DISASSEMBLED
This is the mid production sight with the rounded blade notch in the sight base.
The elevation screw is a different design then the early version.
Note the two tiny balls and spring. These get lost easily.
Note: There's a pin that crosses through the sight leaf that retains the elevation screw.  This schematic doesn't show it. 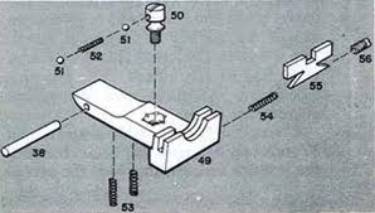 COLT ELLISON TARGET REAR SIGHT
This was used on the Gold Cup Nation Match Automatic and as an option on the Python and other models.
The flat, grooved rear face gave a better sight picture, and gave more elevation adjustment.
These were fitted to the Python along with the Patridge Target front sight. 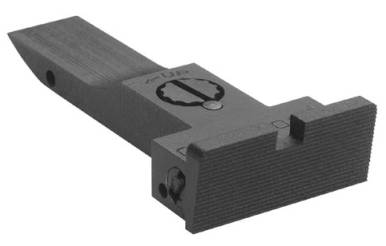 COLT STANDARD RAMP FRONT SIGHT
The Python used two pins to retain the sight until the barrel threads were changed in the 1990's.
At that point only one pin was used to identify the new style threaded barrels.
The same sight was used with one pin on the 6 inch Diamondback.
In the late 70's or early 80's red or red-orange inserts were made standard for the Python. 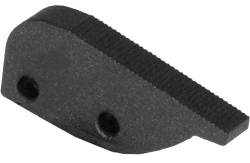 COLT PATRIDGE TARGET FRONT SIGHT.
These were installed along with the Ellison Target rear sight on the Python
This type of Target sight was invented by famed early target shooter E.E. Patridge in 1892. 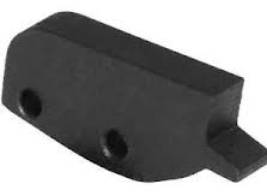 Factory specified double action pull for the Mark III and later Colt's
Maximum
14.0 lbs.
COLD BLUING SCRATCHES AND WEAR.
Bluing is a beautiful, traditional finish and no gun maker did a better job than Colt.  Unfortunately, like most gun finishes bluing is not all that durable.  It wears off due to handling and holstering, and picks up scratches.
A gun owner would like to keep his Colt looking factory new, but the only way to do that is to put the gun in a glass case and never touch it.
Any gun that gets handled or used at all will develop finish damage.
It's possible to touch up this damage by using one of the cold blues but there are some things to know first.
Cold blues are intended to be used to touch up small areas where the bluing has worn off or to color scratches.  They were never intended to be used to re-blue large areas or complete guns.
Colt blues darken steel by an acid chemical reaction that gives the steel a blue-black color.
This is no where even close to matching the factory blued finish, and is not durable at all.  This coloring of the steel can be wiped off by rubbing it a few times with a finger.
Because of the chemicals used in cold blues, cold blue can actually cause the area to rust.
Colt blues tend to turn brown, often within a few weeks.
Cold blues will leave a discolored blotch in the original bluing around the area where cold blue was used and may make the area look worse.
While they can and have been used to re-blue entire guns, the same problems remain; a finish that's not durable and doesn't have the dark blue-black color of a factory
blue job.
COLD BLUES.
There's a number of brands and types of cold blues, including liquids, creams, and "pencils" filled with cold blue.
Brownell's sell most of the better cold blues.
Brownell's own Oxpho-Blue, 44/40, and Dicrophan T-4 all have the best reputations for quality of results.
The key to getting the best results is that the metal absolutely must be as clean and free of oils as possible.
What's needed are solvents that clean off the metal, then evaporate leaving no residue at all.
Denatured alcohol, 95% isopropyl alcohol, Acetone, carburetor cleaner, and electric motor cleaner can all be used, but be very careful to test the cleaner in a hidden spot.  Some chemicals can remove or damage bluing.
Once the area is as clean as possible, apply the cold blue per the directions on the container.
Some people have had good results by using 0000 steel wool to apply the cold blue, rubbing the coat on lightly with the steel wool.
Steel wool is soaked in an oil to prevent it from rusting.  That oil can contaminate the area and prevent getting good results.
In order to prevent contamination, first soak a small ball of the 0000 steel wool in alcohol to remove the oil and allow the steel wool to air dry before using.
Others prefer cotton swabs or cotton balls, depending on how big the area is.
For scratches, using an fine artist's brush will allow applying the cold blue to only the scratch and keep it from discoloring the bluing around the scratch.
Multiple coats may be applied to get as dark a color as possible.
The metal must be thoroughly rinsed per the directions to get all the residue off the metal, or the metal will rust later.
After the bluing is complete a coat of a good rust preventing lubricant must be applied to prevent rust.
After using cold blue, the owner is well advised to keep a close watch on the gun for at least a few weeks to catch it in time if the cold blued area starts to develop rust.