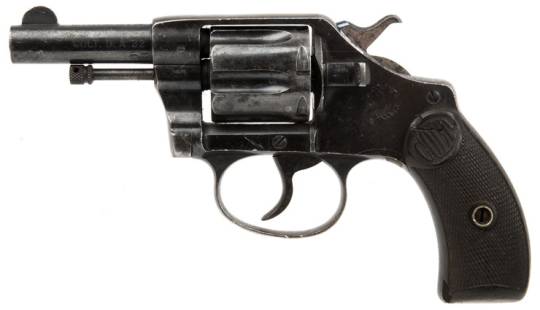 COLT NEW POCKET
NEW POCKET FRAME
In 1895 Colt introduced a new design double action, swing-out cylinder revolver that would be used as the basis for every Colt double action revolver that followed up until 1969.
The Colt New Pocket was a small framed revolver chambered for low pressure short cartridges, and was intended to be an easily concealable revolver smaller than the medium framed Colt New Army & Navy revolvers.
The New Pocket was a much better design then the New Army & Navy revolvers, having an improved simpler, more sturdy action.
The New Pocket was an immediate hit with police and civilian buyers, and was the first of a series of Colt revolvers that dominated the police market for the next 70 years.
The New Pocket was available in .32 Short and Long Colt, and the .32 Colt New Police, which was interchangeable with the S&W .32 Long.
It was available in bright blue and bright nickel, and in barrel lengths of 2 1/2", 3 1/2", 5", and 6".
The grips were hard black rubber, with molded in checkering and Colt logo.
It was manufactured from 1895 to 1905.