COLT OFFICER'S MODEL TARGET
"E" FRAME
In 1904 Colt introduced it's first medium frame double action target model revolver as the Colt Officer's Model.
From then to 1969 Colt would produce versions of this under several names.
The Officer's Model was always Colt's premium revolver until the introduction of the super-premium Python in 1955.
In the days when the revolver was King of the Matches, the Officer's models were always the favorite of the champions and Colt's held all the records.
The Officer's Model, First Issue
The first version was the Office's Model and was based on the Colt New Army & Navy revolvers.
It was introduced in 1904 and produced until 1908.
It was made in .38 Colt Long, and .38 Special.
It had a flat top frame with adjustable target front and rear sights, and a 6" barrel.
Grips were fancy checkered walnut with no Colt medallion.
Officer's Model, First Issue.
Based on the New Army & Navy model

The Officers Model, Second Issue
The Second Issue had the new and improved action as used on the Army Special of 1908.
The second version was made from 1908 to 1926.
Calibers were .32 Colt, and .38 Special.
It offered more variations in barrel length with 4", 4 1/2", 5", 6", and 7 1/2".
Grips were checkered walnut with deep set silver Colt medallions standard from 1913 to 1923.
Officer's Model, Second Issue
Based on the Army Special/Official Police 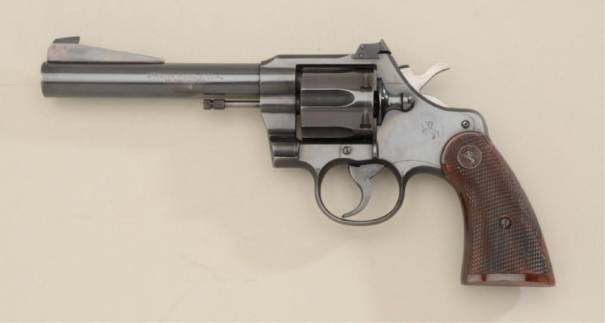 The Officer's Model Match, Fifth Issue
The Officer's Model Match was made from 1953 to 1969.
Calibers were .22LR, .22 Magnum, and .38 Special.
Barrel was 6" heavy tapered.
The rear sight was Colt's new Accro fully adjustable model that would be used on almost all post-war Colt pistols and revolvers that used adjustable sights.
The hammer was Colt's new long, wide diamond-checkered Target hammer that became famous on the Colt Python.
Finish was blue, with bright nickel being rare.
Grips were Colt's new Target type fully checkered walnut with silver medallions.
As a factory option, the Officer's Model Match could be special ordered in a single action-only version.  Genuine factory models are rare.
THE OFFICER'S MODEL MATCH, FIFTH ISSUE 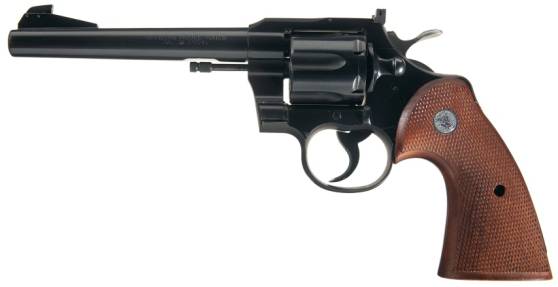 The Officer's Model Match Mark III, Sixth issue
In 1969 Colt discontinued all the older type medium action revolvers except for the Python.
The replacement was the new Colt "J" frame transfer bar safety-ignition system that required much less hand fitting.
Colt offered a number of versions made with the new frame design to correspond to the older types.
The replacement for the Officer's Model Match was the Officer's Model Match Mark III.
This was basically a version of the Trooper Mark III, only in .38 Special, with a vented rib 6" barrel and a Patridge Target front sight.
It had a wide spur Target hammer, a grooved trigger and Mark III type Target grips.
Finish was blue.
Colt made 496 in 1969 to 1971, with most apparently shipped to Europe.
OFFICER'S MODEL MATCH MARK III, SIXTH ISSUE