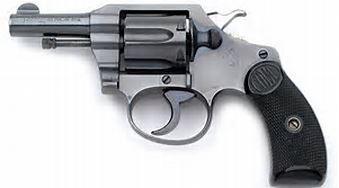 COLT POCKET POSITIVE
IMPROVED NEW POLICE FRAME
The Colt Pocket Positive was nothing more than the New Pocket model with the addition of Colt's new "Positive Safety" feature.
The Positive Safety was a steel bar that retracted down inside the action as the trigger was pulled and allowed the hammer to move forward and fire the cartridge.
This added an additional layer of safety to the Colt rebounding hammer safety feature of the New Pocket and made it more safe if the gun were to be dropped on the hammer.
The Pocket Positive with it's Positive Safety more or less finalized the design that Colt would use up until 1969 for it's double action revolvers.
It would not be until World War Two that competitor S&W would introduce a similar hammer blocking safety device.
The Pocket Positive was available in .32 Colt, .32 S&W, and .32 Colt New Police.
Finishes were bright blue, and bright nickel.
Barrels were 2 1/2", 3 1/2", and 6".
The Pocket Positive First Issue had "knife blade" front sights and was produced from 1905 to 1927.
The Pocket Positive, Second Issue was the same gun only with a matted top strap, wider sights and available with a 2" barrel.
It was produced from 1927 to 1940.