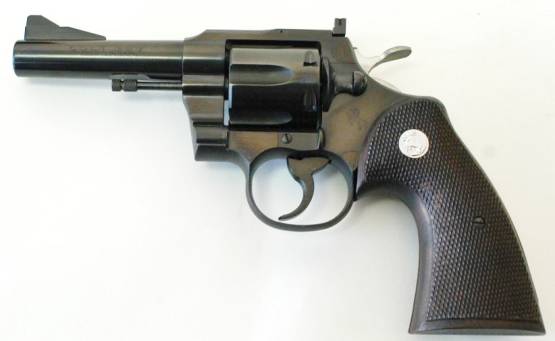 THE COLT 357
"I" FRAME
In the early 1950's Colt began to upgrade it's product line by adding new models and upgrading old ones.
After the war ended, Colt had made a marketing error in assuming that the post-War customers would continue to buy the same fixed sight, .38 Special revolvers they'd bought before the war.
Colt had assumed that the .357 Magnum would be a cartridge bought only by a few customers, so they'd largely ignored it. With the large frame New Service model discontinued during the war, Colt didn't have any double action revolver in it's line that could be chambered for the powerful Magnum round.
Realizing they'd made an error, Colt decided to develop a new revolver specifically for the Magnum round and they shook up the gun world with what they developed.
Accepting that many buyers would now demand adjustable sights on revolvers, Colt developed a new series of medium framed, adjustable sighted holster revolvers to meet the need.
For those buyers who wanted an inexpensive service type revolver, Colt developed the Trooper series. These would be .38 Special adjustable sighted revolvers aimed at the law enforcement market.
Following a common practice, they also offered a .22LR version for use as a training revolver to complement the .38 Special model.
These Trooper models were really nothing more than the Colt Officer's Model Match fitted with a heavy barrel with a ramp type front sight on a large ramped base.
To meet the desire for a .357 Magnum holster gun, Colt developed a totally new concept: a .357 Magnum revolver built on a medium frame.
Prior to this, all .357 revolvers had been built on large frames, Colt using the New Service frame, and S&W using their large "N" frame.
The new medium frame revolver was built on a modified and strengthened Colt medium frame. Colt had used this basic medium frame since the Army Special of 1908.
For use with the Magnum round, Colt changed the medium "E" frame with it's hammer mounted firing pin to a new design with a spring loaded firing pin mounted inside the frame. To withstand the much higher pressures of the .357, Colt gave the frame and cylinder of the new gun special heat treating to increase it's strength.
This new frame design was named the "I" frame.
The new gun was ready in 1953 and Colt gave it a unique name: The Colt 357. This was both the name and caliber.
The 357 outwardly had a close resemblance to the new Trooper models, since they used the same frame size and action. The new 357 and Trooper were virtually indistinguishable without a close inspection.
While the Trooper was to be a lower cost model, the new 357 was to be Colt's premium model holster revolver with a more carefully fitted and tuned action and a better external finish.
The idea was that law enforcement and civilian buyers wanting a less expensive adjustable sight revolver would buy the Trooper, buyers wanting the .357 Magnum cartridge or wanting a higher quality gun would buy the 357.
Things got confused in 1955 when Colt introduced the "Super Premium" Colt Python. Buyers wanting a cheaper gun continued to buy the Trooper, but those wanting a better gun were buying the new Python. This left the 357 as odd man out, and in 1961 Colt discontinued the 357 model after about 15,000 had been produced.
PRODUCTION 357 REVOLVERS
The new 357 was offered with few options and very few changes were made to it during it's production life.
The 357 was offered only in the .357 Magnum chambering.
The 357 was offered with the customers choice of any combination of Service type grips, Service type hammer, and Target grips or Target Hammer.
Usually these were matched with revolvers fitted with Target hammers also fitted with Target grips and revolvers fitted with Service hammers usually fitted with Service grips.
The 357 was offered with a 4 inch barrel or a 6 inch.
The only finish offered as standard was blue, although late in production Colt did offer it in bright nickel.
The early versions were finished with the 1950's Colt "Duo-tone" bluing. In this finish, the sides of the frame and the outer diameter of the cylinder was finished in bright blue, while the flutes of the cylinder and the edges of the frame and trigger guard were given a bead blasted flat black finish. The end of the muzzle was left in un-blued bare steel with a bright polish.
Later in the 1950's Colt changed this to a full polish blue job with the muzzle also blued.
The Colt's of the early 1950's were fitted with the first type of Colt Accro rear sight. These early sights had the front end of the sight leaf rounded off.
Within a year or so, the front of the leaf was changed to an easier to produce squared off profile.
By the later 1950's, Colt changed the design of the Accro sight slightly. The new sight had a raised "hump" on the rear of the sight leaf to allow for more elevation adjustment and the elevation screw design was changed.
From introduction in 1953 the 357 used the new Colt Target grip design. This grip was completely checkered on the sides and was made of American walnut with a dull oil type finish.
Very late in production the grip was changed to the Colt Second Type with checkering ending below the Silver Colt medallions in a semi-circle, and a loading clearance cut on the left side grip.
Following Colt practice of the time, all 357 revolver grips had Silver Colt medallions, Gold being reserved for the Python.
SPECIAL ORDER MODELS
As always, Colt would make custom order firearms, including engraved versions on customer request.
The most famous special order 357 models were the Florida Highway Patrol guns.
Florida Highway Patrol special ordered a number of 357's with 5 inch barrels and a bright nickel finish to add durability to guns that were used in Florida's humid and often salty conditions.
Until very late in production, these were the only bright nickel 357's known to have been made. 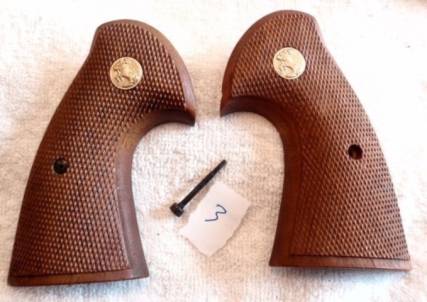 SECOND TYPE TARGET
"Half moon" checkering border under the medallions.
Loading clearance only on the left side.
Silver medallions
Possibly used on the last 357 Models 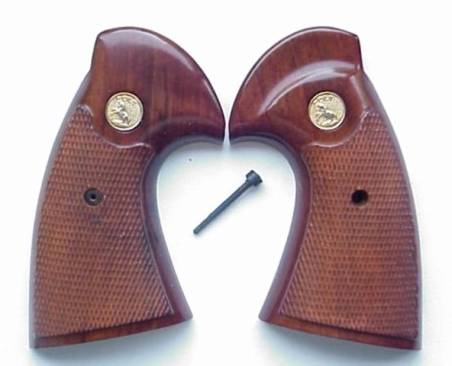 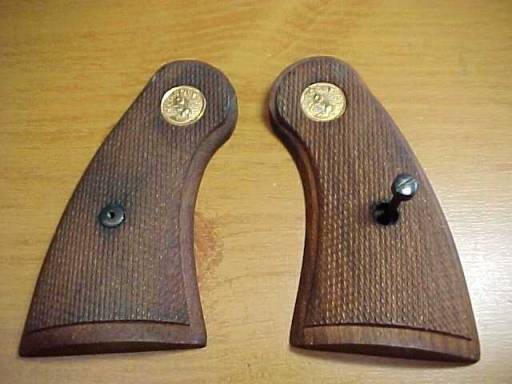 SERIAL NUMBERS
As was the practice of that time, the 357 series started with serial number One and progressed until the end of production at "around" 15,000.
Exactly how many 357's were actually made is known only to Colt. The publicly available Colt factory records simply say that the serial numbers stopped somewhere around number 28,000. Since the 357 also shared serial numbers with some Trooper models, that may account for serial numbers higher than the aproximately 15,000 357 revolvers made.
As is often the case with Colt firearms, serial number ranges and actual numbers of guns produced can be confusing.